“Jehosheba […] took Jehoash […] and stole him away from among the sons of the king who were to be put to death, keeping him and his nurse in an inner bedroom. They managed to keep him concealed from Athaliah, so he was not put to death.”
~2 Kings 11:2

Who was Athaliah, and why was she trying to put baby Jehoash to death?
I have facilitated my own understanding of this passage by drawing out this simple family tree of royal lines in Judah and Northern Israel at that time. 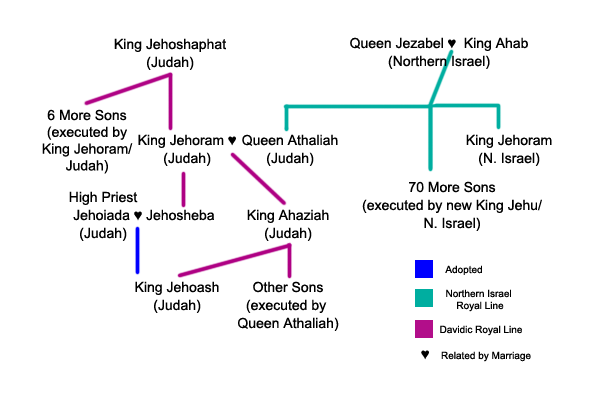 Athaliah was the daughter of evil Queen Jezabel and apostate King Ahab of Northern Israel.

When her son, King Ahaziah died, she put all her grandchildren to death, taking over the kingdom of Judah (2 Ki. 11:1).

However, she was unable to put one child to death: Jehoash, who was stolen by his aunt Jehosheba.

Jehosheba was a true worshipper of Jehovah God and she did not fear standing up to the evil Queen Athaliah, even at the risk of her own life.

She and her husband, High Priest Jehoiada, hid the baby prince Jehoash for six years (2 Ki. 11:3).

What I find most encouraging about this passage is the valor and selflessness with which Jehosheba protected her nephew, undeterred by half her family’s bloody history or bad example.

She is a model for those women living in difficult family circumstances in which their faith in Jehovah is tested on a daily basis.

The point I’d like to highlight of last week’s reading is the mercy Jehovah extended toward King Ahab of northern Israel, despite Ahab’s evil ways.

Jehovah is able to see past a person’s sins and give him a chance to change time after time because he sees his full potential.
If someone humbles himself, Jehovah is always ready to make peace with that person.
In Ahab’s case, he did not fully grasp the privilege of being forgiven, for he continued to endanger true prophets’ lives and ended up going to war against God’s will, where he died (1 Ki. 22:26-28, 34, 35).
Truly Jehovah is “good and ready to forgive,” so long as we follow through with repentance by changing our ways of the past (Ps. 86:5).

The man saying these words, Obadiah, was a servant to the apostate king of Northern Israel, Ahab.
While Ahab and his pagan wife, Jezebel, were determined to execute every one of Jehovah’s prophets in the land, Obadiah bravely hid the prophets in caves (1 Ki. 18:3,4).
The prophet Elijah’s soul was much sought after in royal excursions, for Elijah had caused a severe three-year drought to plague the land, on account of the people’s unfaithfulness to their God (1 Ki. 17:1).
That is why when Elijah asked Obadiah to tell Ahab that he would meet with him to relay a divine message, Obadiah hesitated.
He thought Elijah would immediately be sent elsewhere by God, thereby eluding King Ahab once more.
Then surely Ahab would take his wrath out on Obadiah himself.

“However, Elijah said: ‘As surely as Jehovah of armies whom I serve is living, today I will present myself to him.’
“So Obadiah went off to meet Ahab and told him, and Ahab went to meet Elijah.” (1 Ki. 18:15,16).

What impresses me about Obadiah is his ability to have kept his zeal for true worship alive even under extremely dangerous circumstances.
His loyalty to Jehovah came first, even at the risk of his own life.
He collaborated with Elijah and put faith in him as God’s messenger.
As for us, do we let our bosses or professors order us around into a frame of mind in which God is no longer a priority for us?
Do we let work or school dictate our priorities, constantly leaving out spiritual activities because we are afraid of what our superiors will think?
Like Obadiah, we need to know where to draw the line when someone influential tells us to go against God’s principles.